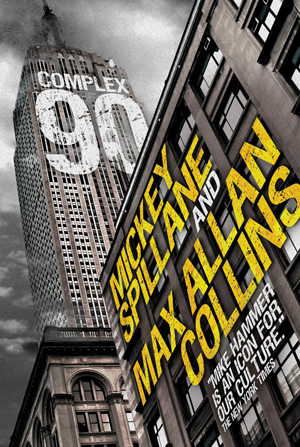 Hammer accompanies a conservative politician to Moscow on a fact-finding mission. Arrested and imprisoned by the KGB on a bogus charge; he quickly escapes, creating an international incident by getting into a fire fight with Russian agents.

On his stateside return, the government is none too happy with Hammer. Russia is insisting upon his return to stand charges, and various government agencies are following him. A question dogs our hero: why him? Why does Russia want him back, and why was he singled out to accompany the senator to Russia in the first place? And why does every beautiful woman he encounters seem to have a seductively hidden agenda?

The Celebrity Cafe: “Complex 90 is a fast-paced Cold War thriller that is a real treat.”

Greenwich Library: “one exciting fast paced thriller that keeps you glued to the page from start to finish. And that great nasty final scene when Hammer finally settles accounts... Well, you'll be left breathless by then.”

The Fandom Post: “Complex 90 is two-fisted storytelling in the classic Spillane style. Everything is written just a little larger than life at a pace that barely stops to catch its breath. It’s a fun, roaring yarn that should satisfy long time Hammer fans and those new to character.”

NerdSpan: “This may have been my first jaunt into the vintage crime world of Mike Hammer, but I doubt it will be the last. In his own crude but unfailingly clever way, Mr. Hammer won me over with his potential for trouble, mayhem and somehow always proving he was right.

Crime Fiction Lover: 4 stars. “Hammer is a rocket, and Complex 90 is a blast.”

CrimeTime: “Spillane at his best”

Bill Crider's Pop Culture Magazine: “[Complex 90] might just be my favorite of Max Allan Collins' posthumous collaborations with Mickey Spillane. It's thoroughly true to the spirit of Hammer's '50s and early '60s novels, with lots of action, lots of great Hammer put-downs of the government agencies who think they can control him, a great evocation of the times, and a socko ending. Top-notch entertainment.”

The Bookbag: “There is a real sense of joy in the action as Collins takes Spillane’s notes and writes a fun action thriller that leaves the PC brigade crying in its wake.”

Nerds in Babeland: “reading a Mike Hammer detective story is like plunging into a familiar, classic noir hot tub–settling in to the abrupt cadence of Hammer’s inner monologue as the lights dim.”

Mystery Maven: “Hammer fans will be glad to see him back in the skillful hands of Max Allan Collins.”

Team Hellions: “a guaranteed sit on the couch with a big dumb smile on your face because you’re having so much fun reading this kind of book.”

The PullBox: “A gritty adrenaline-filled A+”

Geek Hard: “Mike Hammer is one tough son of a bitch.” “visceral and raw…there’s never a dull moment.”

nerds of a feather: “Hammer’s carnage abroad is a mere set-up for a far more interesting and intricate story. Granted, Mike Hammer does what he does best, dispatching goons, bedding women, and telling bureaucrats where they can shove it. But these tough guy antics serve the plot, which is compelling and fairly complicated.”

Ed Gorman's Blog: “One compelling scene piles on another with Collins having a lot of fun with Hammer at his most violent and the era at its most reactionary.” “the superior craftsmanship, the sly humor and the relentless pacing that have made Max Collins an increasingly important mystery writer are all here in plain sight.”

Not The Baseball Pitcher: “Max Allan Collins gets better with every Mike Hammer” “Nicely paced Hammer thriller that I devoured in a couple of sessions in the afternoon. Worthy of a read.”

Impedimenta: “[Complex 90] is crime fiction at its finest.”

Cult Geek: “The novel cartwheels from the US to Russia and back again, packing in dames and guns and dames with guns and wanton destruction on a level that I certainly hadn't expected from the outset. Suffice to say it is a lot of fun.”

The Curiosity of a Social Misfit: “pure and utter classic Mike Hammer” “if you want a fast paced, action packed spy thriller with a ton of twists and turns then this one is well worth picking up.”

Pulp Fiction Reviews: “[Collins's] prose never lets up for a second…a slam-bang climax that had us needing a drink when it was over.”

Interview: Max Allan Collins, Author of Complex 90, Seduction of the Innocent, Road to Perdition and… from Geek Girl Project. May 15, 2013.

I'll Take Mine Hard-boiled: Mike Hammer, X, and The Return of Dime Novel Prose from Unreality Magazine. May 16, 2013.

Interview with Max Allan Collins from The Celebrity Cafe. June 6, 2013.

An Interview With Max Allan Collins About His Two Newest Books from Blogcritics. June 10, 2013.

Chapter One excerpt from Boing Boing.