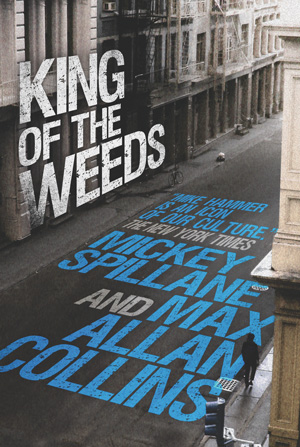 Hammer finds himself up against a clever serial killer targeting only cops. A killer his old friend Captain Pat Chambers had put away many years ago is suddenly freed on new, seemingly indisputable evidence, and Hammer wonders if this seemingly placid, very odd old man might somehow be engineering cop killings that all seem to be either accidental or by natural causes. At the same time Hammer and Velda are dealing with the fallout – some of it mob, some of it federal government – over the $89 billion dollar cache the detective is (rightly) suspected of finding not long ago.

Comic Book Resources: “…tremendously engaging and impossible to put down. I don’t know if Collins saved the best for last or what, but I think [King of the Weeds] and the one that preceded it, Complex 90, are the best ones yet. If you like tough crime stories and especially if you like Mike Hammer, this is very much recommended.”

Book Reporter: “Collins has taken Spillane’s notes and worked Hammer magic with them…King of the Weeds is tops…a super fun read with high-adrenaline shootouts, thrilling chase scenes and, best of all, a truly killer ending. They just keep getting better.”

Ed's Blog, Greenwich Library: “one heck of a terrific thriller”

Crime Fiction Lover: “Reading the titles that Max Allan Collins helped complete has been a pleasure and a revelation.”

Nerd Span: “A touch of nostalgia wrapped around a fist that punches you in the gut, and I liked it. King of the Weeds is a good read. It’s definitely recommended for fans of Mike Hammer, and worth a look if you’ve never tried one before.”

Retrenders: “Each page turn will have your blood pumping”

The October Country: “with Spillane and Collins at the helm [King of the Weeds] is a tightly wound page-turner that continues to build steam chapter by chapter.”

Ed Gorman: “Max Allan Collins doesn't merely collaborate with the late Mickey Spillane. He enriches and even improves on his master…A real blast of what pulp fiction ought to be.”

Pulp Fiction Reviews: “Collins, through his never wavering respect for these characters has delivered them to a finish line Spillane would have been proud of. Known for using that last sentence in his books like a final punch to put away his critics, Spillane wielded sentences like a surgeon’s scalpel with finesse and razor sharp precision. A skill he taught this Collins kid and when you read the last line in King of the Weeds, like me, you’ll have a wicked smile on your face. I guarantee it.”

Singular Points: “Collins gets the voice and the attitude so right that the protagonist IS Mike Hammer, no matter who wrote what.… I'm shelving these collaborations with Spillane's solo efforts and I can't give a better compliment. Highly recommended.”

An Interview with Max Allan Collins by Jon the Crimespree Guy for Crimespree Magazine. Published April 18, 2014.

Smoke and Murders: Hammer Knows Where the Billions Are Buried, an interview (Part 1) by J. Kingston Pierce for Kirkus. Published April 29, 2014.

Collins Hammers Out His Legacy, an interview (Part 2) by J. Kingston Pierce for The Rap Sheet. Published April 29, 2014.

The Case of the Aging Sleuths and the Dying Detectives by Max Allan Collins for The Huffington Post. Published May 19, 2014.